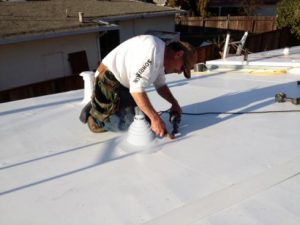 TPO (thermoplastic olefin) roofing is the newest option out there for large scale, low slope, commercial and industrial buildings. It is as UV-resistant and as heat-resistant as EPDM roofing and heat-weldable like it’s PVC competitor. In addition to having all of the advantages of the nearest competitors it also is cheaper. With all of this going for it, TPO should be the number one choice for commercial roofing applications, but it’s not. Here’s why.

Even though TPO roofing does offer several advantages, it has a history of failing to withstand typical roof conditions. This is mostly due to the fact that roofing supply manufacturers were driven by profit motives instead of quality ones. This led to several failures on major roofing structures. While these were easily repaired by cutting out the failed areas and replacing them with new material, it still led to TPO developing a reputation for failure.

The new generation of TPO roofing materials is much higher quality than those produced in the past and we are fairly confident they are a suitable choice for most uses in the Bay Area.